The Year of the Mast

The following is an excerpt from a letter to the friends and members of HRHBRSS
from Harold Ellis Bush. His reflections on his days as a boy on the Eleanor
beautifully remind us why we are scraping paint and removing screws
and declaring 2014 The Year of the Mast.

We are restoring a wooden boat, most likely the last of its class and design that spent most of her life on our Hudson River. Clinton H. Crane, a naval architect, designed it at the turn of the century. More than its historical significance, 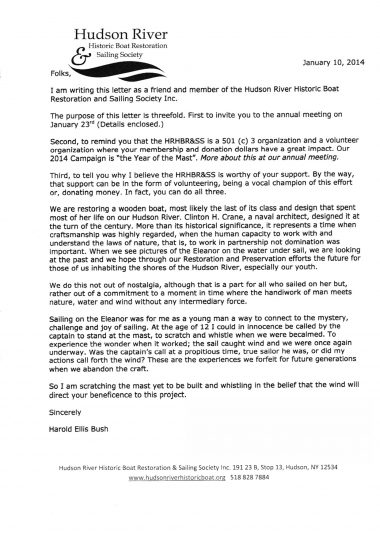 it represents a time when craftsmanship was highly regarded, when the human capacity to work with and understand the laws of nature, that is, to work in partnership not domination was important. When we see pictures of the Eleanor on the water under sail, we are looking at the past and we hope, through our Restoration and Preservation efforts, the future for those of us inhabiting the shores of the Hudson River, especially our youth.

We do this not out of nostalgia, although that is a part for all who sailed on her but, rather out of a commitment to a moment in time where the handiwork of man meets nature, water and wind without any intermediary force.

Sailing on the Eleanor was for me as a young man a way to connect to the mystery, challenge and joy of sailing. At the age of twelve I could in innocence be called by the captain to stand at the mast, to scratch and whistle when we were becalmed. To experience the wonder when it worked; the sail caught wind and we were once again underway. Was the captain’s call at a propitious time, true sailor he was, or did my actions call forth the wind? These are the experiences we forfeit for future generations when we abandon the craft.

So I am scratching the mast yet to be built and whistling in the belief that the wind will direct your beneficence to this project.