Great Article in the Almanac Weekly by Debra Bresnan 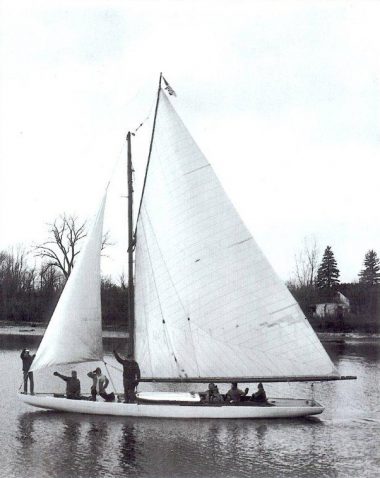 Louise Bliss spends her days and nights fulfilling the responsibilities that you normally expect from the leader of a non-profit organization: grantwriting, public speaking, administrative duties…but wait – is that her scraping paint off the hull of an old boat? And is that Bliss wearing a facemask and holding a piece of lumber to steady it during a precision cutting? She knows quite a lot about copper rivets, how to distinguish red from white oak and what green wood is used for, too.

The president of the Hudson River Historic Boat Restoration & Sailing Society, Inc. modestly describes herself as “a gopher. If we need lumber, rivets, epoxy, tools, I’ll study it, research pricing, go out and network with people and learn about it. I’m a lifetime learner,” Bliss says simply. Her labors, and those of many volunteers associated with the Hudson-based non-profit, are focused on one goal: restoration of the 1903 Clinton Crane sloop Eleanor.

The 12-meter racing sloop is entered in the US National Register of Historic Places (1982) and the New York State Register of Historic Places (1983), and is the last known example of a “raceabout”: a class of boats designed for speed. As such, Eleanor offers sailing enthusiasts, master craftsmen, history buffs and boat designers a rare opportunity to observe an important chapter in the evolution of sailing and sailboat design. Once restoration of the nine-passenger sloop designed by Clinton Crane in 1903 is complete, it will become what Bliss calls “an intimate classroom.” 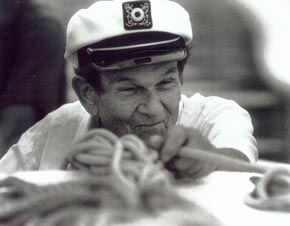 “The Eleanor is small enough that passengers are part of a team. On this boat, you’re involved in sailing. You don’t just sit and watch someone else haul the lines; you’re part of the crew. We may allow a few more people on board if the weather is good, but nine would be the limit in stormy weather,” says Bliss.

The restoration began in earnest when ownership of the Eleanor was transferred to the Hudson River Historic Boat Restoration & Sailing Society in 2011. One of the many challenges inherent in restoring Eleanor has been that when Clinton Crane died in 1957, all plans for the boat that he created were burned. Restoration plans had to be created from existing boats such as Crane’s Idem Class racing sloop the Water Witch, on display at the Adirondack Museum.

Shortly after bringing Eleanor to Hudson, the organization invited Jim Kricker of Rondout Woodworking in Saugerties to take a look at the boat. “His help has been extremely important for us,” says Bliss. Kricker wrote a complete plan for the ambitious boat restoration, from setting up shop to outlining materials and projecting costs and time estimates. “We’ve been following Jim’s plan and refer to his suggestions often. Just the other day, we needed some copper nails, and I called him, because copper is so expensive.”

In March of this year, volunteers finally turned their attention from the painstaking process of taking Eleanor apart to begin the reconstruction process. A new keelson was installed to support the sloop’s new floor, new ribs and reconstruction of the transom. Mast hoops were cut this month, and new white oak flooring is being laid.

Bliss, who has lived by the Hudson River and worked around boats since she was 12 years old, acknowledges that wooden boat restoration requires an abundance of patience. “We volunteers work together on Thursday evenings, and it’s a cohesive, fun group of people. We’ve established an informal boat school ourselves here in Hudson,” she says, adding, “We’re not licensed, but we’ve learned a great deal about how boats are made.”

This learning curve took a slight turn when workers uncovered a little secret:Eleanor’s floors were asymmetrical. “Eleanor has a rustic, very strong assembly, and she was in very good condition for her age. Often boats this old are sitting in a field somewhere with grass growing up through their hull,” says Bliss. “She’s not symmetrical, but she was built the way she would be strongest. And at about 6,000 pounds, she’s a very lightweight boat, built for racing.”

Part of Bliss’s job is ensuring that US government standards for historic preservation are followed. “The Eleanor is an important part of the history of the Hudson River and the Catskills. Her home port was Catskill from 1927 to 1998, and a lot of people in the area sailed on her and learned to sail on her. We wanted to see her on the water again. We’re doing all of this work for public enjoyment, and because of our love for sailing and education about boating and the Hudson River,” she says.

“The Hudson is a great river for boating because when you’re out on the water, you’re close enough to both shores to see many interesting and beautiful things. Sailing is a great vehicle for learning about yourself, who you are and how to work with other people. Eleanor belongs to the public and to the Hudson River Historic Boat Restoration & Sailing Society, not to just a few people. She was deeded over to our organization, and we take the responsibility very seriously.”

On May 31, an Edwardian Great Lawn and Porch Party – and a silent auction – will be held at the Rokeby Estate to raise funds needed to restore the Eleanor. The afternoon event features a 4 p.m. talk by noted sailor, bowman, tactician and navigator Halsey Herreshoff. The octogenarian is well-known and respected in sailing circles for four successful America’s Cup defenses. “Our speaker also designed boats for speed – bigger ones, classified as yachts – and he was a competitor of Clinton Crane. This is our first major fundraiser,” continues Bliss, “and we hope to raise a significant amount of funding.”

Guests are welcome to stroll the grounds of Rokeby, built in 1815 and one of the Hudson Valley’s premier estates. The Grand Hall, library, parlor and dining room will also be open for viewing. Bruno Café in Hudson will provide Edwardian picnic fare and sparkling beverages, and the Blackiston Twins will perform keyboard duets of what Bliss calls “good-time music of the 1920s and ’30s. It’s listening and dancing music and, in honor of our special occasion, they have even added a tune from 1903 to their repertoire. And of course, people are encouraged to dress up in Edwardian style – even if they just wear a bowler hat.”