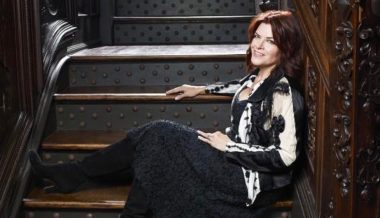 In the wake of her remarkable new album, She Remembers Everything, which takes on the urgent issues of our time, particularly the #MeToo movement, multiple Grammy Award-winner Rosanne Cash – a scion of America’s first family of country and roots music – will perform a gala concert to benefit the Hudson River Historic Boat and Sailing Society’s efforts to restore the historic, century-old Hudson River sloop Eleanor at Club Helsinki Hudson on SATURDAY, May 4, at 7:30 pm (Rosanne taking the stage at 9pm).

One of the country’s preeminent singer-songwriters, Rosanne Cash has released 15 albums of extraordinary songs that have earned four Grammy Awards and 11 nominations, as well as twenty-one top 40 hits, including eleven number-one singles. She is also an author whose four books include the best-selling memoir “Composed,” which the Chicago Tribune called “one of the best accounts of an American life you’ll likely ever read.” Her essays have appeared in the New York Times, Rolling Stone, the Oxford-American, the Nation and many more print and online publications. In addition to regular touring, Cash – a daughter of the late country music legend Johnny Cash — has partnered in programming collaborations with Carnegie Hall, Lincoln Center, San Francisco Jazz, Minnesota Orchestra, and the Library of Congress.

Cash’s most recent album, She Remembers Everything (Blue Note Records), captures with grace and stark melodies the urgency of our human moment. The album offers shimmering pop – with hints of twang and jazz – that could find a home in almost any year of postwar American music. But the luminescence and bright production are shot through with a darker vision. Trenchant vocals, minor chords, and bent notes destabilize the landscape. Familiar yet alien, Cash’s take on being a woman in the world reveals just how much has gone awry. It’s an instant classic along the lines of Emmylou Harris’s “Wrecking Ball” and Shawn Colvin’s “A Few Small Repairs.”

The album reckons with a world that embraces and betrays, sometimes in the same moment. Descending chords lead to dizzying songs that unfold like a hallucination of falling downstairs, in which “the station pulls away from the train / the blue pulls away from the sky.” The feminine gothic theme registers on the album as a cloaked portrait of women’s anger and longing, love and madness, and a host of confrontations with death.

Cash’s voice seems to only become more resonant and expressive with time. She has recovered from polyps on one side of her vocal cords, as well as devastating brain surgery. Her traumas speak to the mortality that finds reflection in her songs, addressing head-on the wonder and fragility of remaining alive for another record, another year. It is hard to picture her writing these new songs a decade ago. Perhaps with time shorter, there is more to say.

Cash’s most recent work includes a trio of albums exploring her roots. Black Cadillac followed the deaths of her mother, stepmother, and father more than a decade ago. In 2009, The List delivered a dozen covers from an index of 100 essential American songs her father had compiled for her. Her last album, 2014′s The River & The Thread, won three GRAMMYs.

Closing out the four decades Cash has spent as a recording artist, She Remembers Everything contains echoes of nearly all her previous stylings. Listeners who grew up singing along to ” Seven Year Ache”, ” I Don’t Know Why” and ” Runaway Train” on top-40 stations or love”). “Not Many Miles To Go” likewise plumbs the inevitability in any lasting marriage that one partner will bury the other. Celebrating the disasters survived, problems solved, and joys experienced (“the baby boy and world on a string”), the narrator name-checks a view of the Empire State Building, small-batch bourbon, and a Telecaster as the treasures she will guard in life or in memory, and hazards a guess at what her partner might remember if she dies first.

Fraught family history frames ” Everyone But Me”, an exquisite mosaic of generational grief and dislocation. Cash’s guitarist/husband John Leventhal lays the foundation for the song with spare, ghostly piano, like some lost Stephen Foster dirge. Amid a raw soliloquy to dead parents, their shared sorrows and lies, and a race course littered with broken glass, their daughter finds the time since losing them “not nearly long enough / still it seems too long.”

On the title track for the album, a “Moonlight Sonata”-style piano morphs into discordant guitar, pulling in co-writer Sam Phillips on backing vocals for powerful, plaintive effect. There’s an implicit link between ” Everyone But Me” and ” She Remembers Everything”: the “girl who sings” – what was her essential self before all the damage and paralysis got piled on?

Cash was featured in ” A Night of Performance & Conversation” at The Greene Space at WNYC & WQXR, with Peabody Award-winning Brooke Gladstone, host of On the Media.

Just for fun, watch Rosanne singing ” The Weight” along with the Band’s Levon Helm, Larry Campbell, and Jim Lauderdale.

The racing sloop Eleanor is a registered historic landmark with a story that makes history real. A vessel 105+ years in age is completing a historic eight-year restoration. Local citizens have contributed thousands of dollars and volunteer hours. The Gala Fundraiser at Club Helsinki Hudson is intended to raise funds to install the rigging and sails before Eleanor sets sail this summer.

In addition to Rosanne Cash’s performance, the evening will feature door prizes, a raffle, tales from the river, and more. All ticket proceeds go to Hudson River Historic Boat and Sailing Society – a not-for-profit corporation.

Remember – for reservations in The Restaurant or in the club call 518.828.4800 . To purchase tickets online go here . For the most up-to-date concert information, always visit Club Helsinki Hudson .